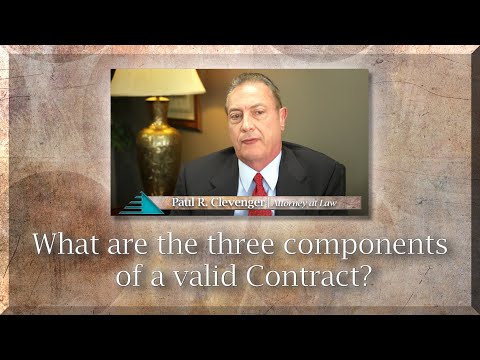 DO I HAVE A BREACH OF CONTRACT CLAIM?

1. Is there a legal contract?

Offer. One party to the contract must make an offer of a contract to the other party. The party offering the contract (the “offeror”) must demonstrate an intent to enter into a binding agreement, and the offeror must make the terms of the contract reasonably clear.

Consideration. The contract must be supported by consideration. Generally, consideration consists of mutual promises between two parties. In other words, each party must promise to do something for the other, so that each party loses some benefit in return for some other benefit. For example, in a contract to build a home, the builder loses his or her time, materials and labor in building the home (loss), and receives money in return (benefit). The purchaser promises to pay the contractor for the time, materials and labor that he or she expends in building the home (loss) and receives a completed home in return (benefit). Note that if one party promises to do something for another, but the other party promises nothing in return, there is no consideration and thus no contract.

2. Is there a Breach of the Contract?

The term “breach” means the failure, without any legal excuse, to perform a promise that forms all or part of a contract, the refusal to recognize the existence of an agreement, or the doing of something inconsistent with the fact that the contract exists. Usually, you can sue for breach only if the breach is a “material” one, meaning that the breaching party failed to comply with an important term of the contract.

Be aware that breach of contract cases can often be complex. Thus, the information set forth above is intended for general information purposes only and does not constitute legal advice. If you believe that you are a party to a contract that has been breached, contact the Law Office of Paul R. Clevenger to discuss your contract.